Whoot!  In a surprise turn of events, my email and website store are BACK UP!  This whole thing has given me a sour taste in my mouth for this service, and I am going to continue to look for a new method of hosting and eCommerce. But for now, grOw can be purchased as usual at www.bustartist.com !
Posted by BustArtist at 2:48 PM 1 comment:

A few days ago, I made a simple post that said my website was down, and that IT was looking into it. I thought that this would be a short-lived event. Turns out it was short!

Hopefully, I will have "www.bustartist.com" back online soon with a new host, but I have to find a new store. Again, this will be a NEW store, with no connection to the old (which was provided by my Host), and thus, all accounts will have to be remade. I will have no record of your past sales or correspondence. I apologize for any inconvenience.
Email is back up! For now, work IS continuing. I will also be looking for a new website solution, however.

Wish me luck. The timing on this is very bad for me indeed.
Posted by BustArtist at 10:32 AM No comments:

FYI --  www.bustartist.com is currently down. I have put in a request to my IT to look into this. I do not know how long this will be.  My @bustartist.com mail is also down.  I will post an update when I know everything is back up.I

Well, I didn't get to start the drawing phase this week, as I had hoped. Turns out that I had a lot more supportive work to finish first before I committed pencil to paper.


I continued working on the layout of the storyline, drawing thumbnail sketches for issue 4. I also worked on the backgrounds some more, having noticed some missing items vital to the story. In addition, I have been rendering the high-resolution backgrounds needed for issue 1. To make sure the drawings line up, I have found out that doing the background first for a panel is a lot easier than trying to fit the background the the pencil drawing.


Another piece of preparation that needed to be done was to look for "reference" material for the characters. Drawing characters requires consistency from panel to panel, and in different emotions and angles, so using reference photos really helps.
Posted by BustArtist at 6:10 PM No comments:

I have completed the first draft of the grOw/cOmic#5 series script, and have begun, in earnest, the thumbnail planning of each page of the series. So far, I have planned out the panels/pages for the first 3 issues (out of 5 in the series). Hopefully, starting sometime next week, I will begin the actual pencil drawing of the pages! Once pencils are completed for the 18 pages of issue 1, I will then begin the inking and painting. At that point, the page previews will commence!
Posted by BustArtist at 7:25 PM 4 comments: 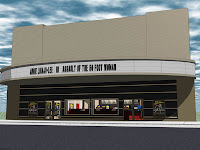 I've been working hard for the last 2 weeks on the next grOw/cOmic series, which will be #5. Yet to be titled, I have completed the first draft of the script for the full series, which, right now, stands at 5 issues. I have also been working on more backgrounds that will be used in the cOmic. As I used for grOw/cOmic#2 to render the pool backgrounds, I am continuing to use Shade 3D (v. 8.5) modeling and rendering software.

Here are a few more previews of the new backgrounds for grOw/cOmic#5. All of the 3D elements, patterns, structures, images, and textures were made by me using Shade 3D, Adobe Photoshop and Adobe Illustrator. Can you pick out any hints to the series?
Posted by BustArtist at 5:59 PM 5 comments:

Thank you to all that have supported the recent release of grOw/stOry #14. For this, I am extending the recently expired Coupon Code for another 5 days on other purchases! This Sales expires February 4, 2012, 11:59 CST (GMT-6: Feb 5, 5:59am GMT) (You can receive 20% off* your order for orders over $8.00 when you put in the Promo Code "bablog112".  Discount does not apply to the newest release, grOw/stOry#14. For a limited time! Does NOT apply to purchases previously made, or purchases in which promo code was not entered. No exceptions, sorry.

It is interesting to note — as mentioned after the last grOw/stOry release — the disparity in popularity between the cOmics and stOries. I still like the stOries, and will continue to release them. Stories can have more details, descriptions, characterizations, and action. However, the last two stOry releases took an enormous amount of time each to produce (both writing and drawing), but the release was only half as successful (if not less) than those of the cOmics. This makes it very difficult to release 3 stOries in a row as I usually have.

Because of this, here is what I plan to work on next:
Thank you to all other those who continue to support grOw and the long hours it takes to produce each issue — either stOry or cOmic. I couldn't do it without you. 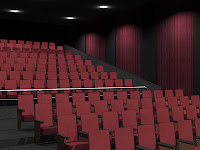 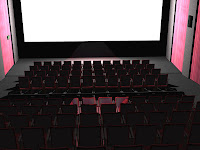 As a close to this post, I offer a sneak preview into grOw/cOmic #5. Here is a preliminary, rendered background scene to the series — a movie theater. While I used Google SketchUp to create the backgrounds for grOw/cOmic#4, I needed something more robust for series#5. I went back to trying out Sketch 3D (I use ver 8.5; the link is for a more powerful ver 10, and the program is up to verison 12.1), which I used to make the pool backgrounds in grOw/cOmic #2. It's been nearly 3 years since I used the program and had to serious re-familiarize (nay, almost completely "re-educate") myself to use it. I think I now have restored the same proficiency in myself that I had had during cOmic #2 — and then some!

Enjoy!
Posted by BustArtist at 9:17 AM 7 comments: