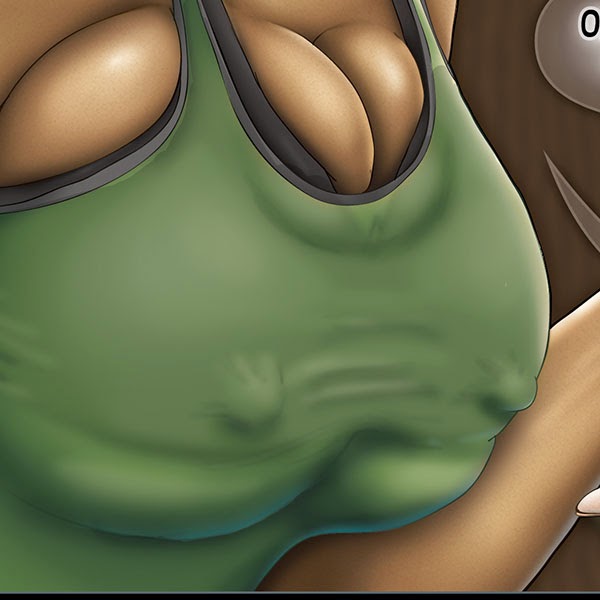 With snow shoveled, ice scraped, and vehicles uncovered, I had nothing else to do but to work on the next page of grOw/cOmic#6, completing page 20. Luckily, the snowfall was on the low end of the forecast (however, this was still about 18 inches), which required less time shoveling, and left more time for inking and painting.
Posted by BustArtist at 3:32 PM No comments: 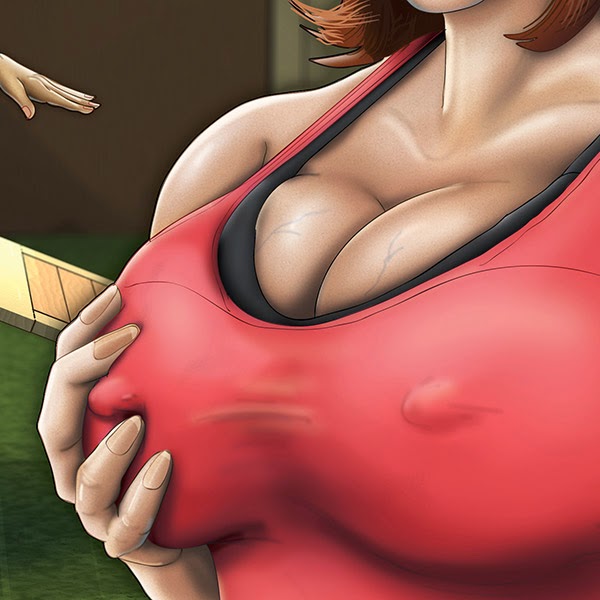 Working under a "state of emergency" as the impending winter storm/blizzard "Juno"* is bearing down on me, I have completed the first page of issue 2 for "Milking the Plot" (page 19 of the series). [* Snowfall expected between 20-30 inches, 25-45 mph winds, with up to 65mph gusts. Yeah... very rare for this area.]

I am very happy to be at this stage so soon after the release of issue 1. Two-and-a-half weeks may sound like a lot, but that includes the first few days for a quick rest and focus on the incoming orders, then pencil drawing all 18 pages, reviewing and reworking the script a bit, as well as setting up the 3D background renders for a few shots (including using simple Poser figures within the actual scene to help with scale, foreshortening, and adjusting the camera).

Enjoy the preview!
Posted by BustArtist at 8:04 PM 1 comment: 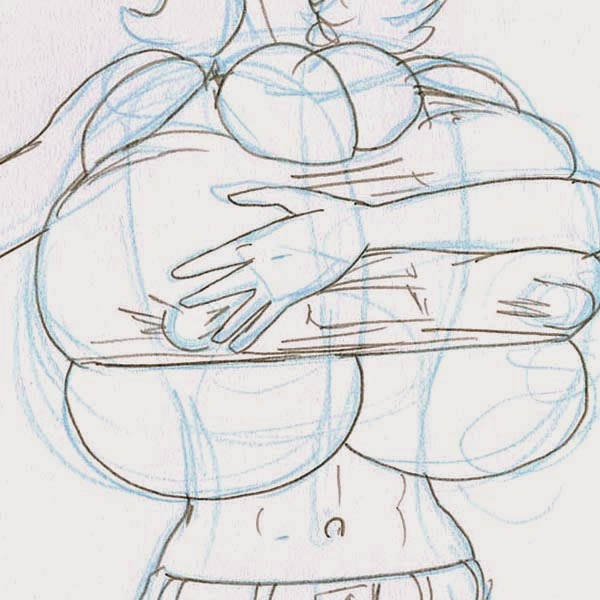 I was soooooo close this week on completing all of the pencil drawings for the 18 pages of issue 2 of "Milking the Plot."  I only have half of the last page to go. This would have taken at least an extra hour and a half or more — which was time I didn't have (having already worked later than normal on Friday).  No problem — I will finish it up on Monday and then be able to begin the ink and paint stage. Of course, this is when I will start posting color previews of each page as they are completed. Let the countdown to the release of issue 2 begin!
Posted by BustArtist at 2:26 PM No comments:

In the past, I've usually taken a small break after an issue has been release to recoup a bit after the last few hectic days to allow my self to do things such as catch up on "real life" work that I put off in order to get the latest issue out.  While I had done some of this since the release of issue 1, it was only for a small amount of time. The rest of the last week or so I have been gearing up to begin issue 2 of "Milking the Plot" (grOw/cOmic#6). 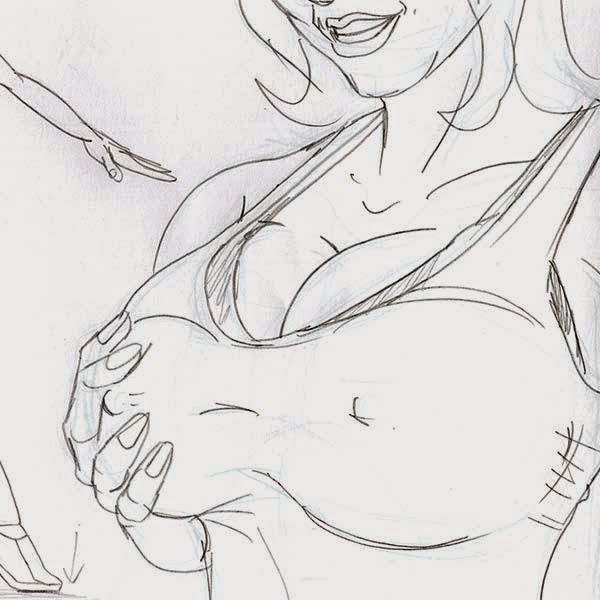 I have been rereading and reworking the script, setting up some backgrounds (especially in which the drawings must sync up perfectly with the background), and finally, sketching/planning out (in thumbnail form) the entire issue's layout, and beginning the actual pencil drawings for issue 2!  I have already completed the first 2 pages in terms of the base pencil templates that will be scanned in, and then "inked and painted" in Adobe Illustrator (lines and flat color, as well as text and word balloons and boxes) and shading, backgrounds, and the rest of the effects (Adobe Photoshop).

I'm hitting the ground running, and hope to get issue 2 out as soon as possible.
Posted by BustArtist at 6:33 PM 2 comments: 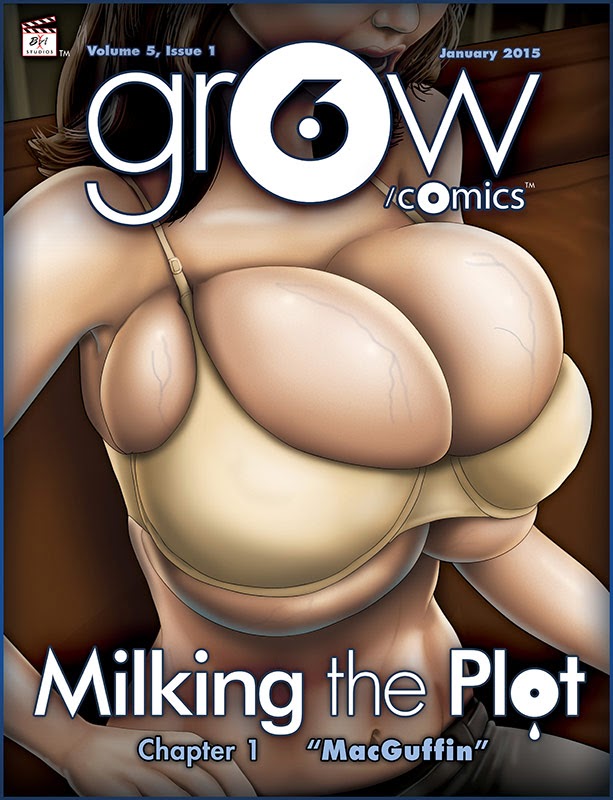 A tittilating new series and sequel to "Milk Farm" (grOw/cOmic 1)
.
Synopsis:
The Hollarin' Huskies cheerleader team sought shelter from a storm in a remote barn. But this was all part of a larger plot, as three of the girls had a secret wager to see who could "score the most" with Dan, the lone male on the team -- and this barn was the chosen setting. Settling in until the roads were clear, they began a drinking contest. However, unexpectedly, most of the girls' breasts start to grow, shocking everyone (and tittilating a few)!

Coming out 10 years after the release of the first grOw/cOmic (July 2005), "Milking the Plot" is a sequel to "Milk Farm", celebrating the anniversary of the first, internet BE cOmic!


Available in either Premium or Standard Versions! 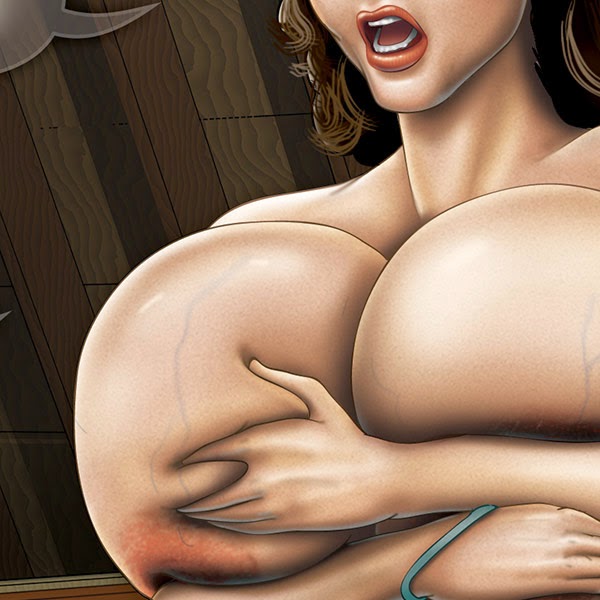 The final page (page 18) for issue#1 of the new grOw/cOmic#6 has been completed! I worked late on this one, as I was determined to finish it before the weekend. I also took some time to comp up the cover, which still needs to be drawn, inked and painted. The cover to issue 2, which will appear at the end as a teaser of things to come, also needs to be done. However, I do not see these taking a lot of time. After that, it's the usual behind the scenes post production work — creating the PDF, updating the website (including all text, art, banners, etc.), and updating the store. I am hoping to have a release sometime in the middle of next week. Crossing my fingers.

In the meanwhile, enjoy the last preview for issue#1.  The next update will announce its release.
Posted by BustArtist at 7:59 PM 13 comments: