I actually released this just prior to grOw/stOry#12 coming out, but I wanted to make sure the stOry's release stayed at top of the blog for a few days, so that everyone saw it. While my Host was handling the upload (which, I am happy to say, went surprisingly fast!), I decided to do a new BE painting. I have been tossing this one around for a while now (like 2-3 years). In some planning sketches, I had the woman opening a gift with a surprised, but elated, look on her face, and Santa looking in the window with a smile. I eventually changed it to this. A small preview is here, but you can download larger resolutions at:
My FREE BEA Gallery (1024x768 and 1470 x 1200)
My BEA Members Gallery (3300 x 2686)
The Process Forum (1470 x 1200)
My DeviantArt page (1024x768)

(I am shocked at how fast my Host put this up. I just sent it to them earlier today. Good news for the new owners of the Hosting company!)

grOw/stOry#12: BEaver Lake Summer Camp
Darryl was the only male counselor left at the end of the season at Beaver Lake Summer Camp. Now that the kids were gone, it was time for the counselors to clean up and have their end-of-season "personal" time together. But things start to get a little odd starting at the camp fire that night. Tanya, a busty counselor who has eyes for Darryl, tells the group of three females and one male of the "Curse of the White Mountains" that caused her boobs to get so big -- a story that she tells everyone who asks her about her large bustline. Though the night ends in raucous laughter at the so-called "curse", her fellow counselors, and even Tanya herself, wonder if the curse is actually real. You see, all the women's counselors boobs are suddenly starting to grow. And grow. And GROW.
This fully rewritten version of the original E.L. Publication's "BOOOooob Camp" completely re-imagines the original story. Well-known BE-author Mr. B has created a whole new scenario for the sole male character who is surrounded by women whose boobs are growing wildly! The only things that are the same from the original story are the names of two characters, a camp setting, and a campfire story.
This stOry features:
> the longest grOw/stOry released! -- twice as long as the average stOry!
> the original story and artwork are included in the index, you will be getting TWO FULL STORIES in one book!
> 16 newly created BustArtist illustrations which are the best quality to date -- which is 3 more than average, and includes 2 full-page spreads.
> the images are saved in the highest compression quality, as well as 50% more resolution!
Category: Breast Expansion (big/huge/wow - mystery); buttons popping; tight spaces; wet t-shirts
151-page PDF ebook, with 16 NEW color illustrations by BustArtist, which are the highest quality to-date! Also contains both the original story by Gene Erik, as well as the original 8 black-and-white line drawings by LoSarro from the former E.L. Publications print version. You get 2 different stories in 1 book!
This story can be purchased at: www.bustartist.com
Posted by BustArtist at 9:04 PM 6 comments:

Update (04 Dec 2009 11:50am EST): the stOry has been proofread and finalized. The PDF file has been uploaded to my Host. Release will depend on how quickly they attach it to my store, which could be 2-10 business days, based on previous times. 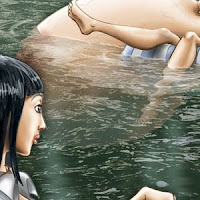 Yes, all the illustrations to the latest grOw/stOry are now finished! The release of this long-awaited edition is imminent. The last few images took some time to complete, as the level of detail was quite large. In addition, the last image is a huge 2-page spread. Click the image to the right for a preview!

The fun new thing I have experimented with in this release is the use of a Photoshop filter called "Lens Blur". Originally, I thought it was just another complicated Blur feature that had little extra compared to the standard blurs. However, I was very wrong. Seeing a demonstration of it online, I realized it's power. Basically, it is a blur filter than uses a grayscale alpha channel to simulate depth of field. Some 3D rendering programs render an alpha channel which is based on the depth of items in the image — white is closest, black is farthest. Using this info, the filter blurs the image in an amount based on the grayscale value. For example, white would get no blur, gray would get some blur, and black would get full blur. You can take an in-focus image and simulate a depth of field similar to photography focusing techniques. Since I use layers heavily both in Adobe Illustrator and Photoshop, it was easy for me to create my own alpha channels that were "depth based". Click the image for a full visual demonstration.

So what's next? Tonight, I will be doing a final proofread, setting up the PDF, and then sending to my Host to upload to my store. Now, just recently, my Host changed hands to a new owner, so I do not know how fast they will work at doing this. However, they have assured us clients that the change-over will be seemless, even hiring many of the employees of the older company. We will see. For the last few releases, this process took anywhere from 2 days to a week and a half.

I will make an announcement here when the stOry is released. I will post any unusual delays as an addendum to this post.