As I watch the trees sway, we await the full landfall of Hurricane Irene here on Long Island, NY. Luckily, the storm has seemed to have diminished significantly from original predictions (quite normal, as hurricanes can be quite unpredictable).
I fully expect to lose power at any time, as 1/4 of Long Island residents already have. I may not be able to respond to any emails or order problems for the next few days.  I am not ignoring you, just unable to respond.  :)
(FYI -- 2 pages of the next grOw/stOry have been completed!  I would have had 1 or 2 more, but I was preparing for Irene.)

Update, 9/1/11:  All is fine. Fared better than most in the area and NE. Just some clean-up and minor power flickers. Those were some wild winds, though!
Posted by BustArtist at 9:00 AM 3 comments:

The pencil drawings for all of the illustrations of grOw/stOry #13 have been completed! Of the sixteen, full-size images, two will also be two-page spreads in the ebook. With these now drawn, inking and painting will now commence. I will show a few color previews, as progress is made. However, as I've usually done for stOries in the past, since there are so many fewer images than a cOmic, it will not be one for every page (so as not to give too much away).
The storyline will also be tweaked and worked on as I complete the illustrations. This will give all of the changes and additions I have made to the original text time to sink in, allowing me to make further modifications as needed. The title has also been changed from the parody-like "Bust in Space" (a humorous take on the old TV show "Lost in Space" and it's newer movie follow-up) to a more BE-related "New mOOns Rising".

Enjoy the pencil preview!
Posted by BustArtist at 6:08 PM No comments:

The Next Project: a new grOw/stOry !

It's been 2 weeks since my last blog post, when I announced the release of grOw/cOmic#4, issue 6, which was the final installment of the series. The first week was dealing with the new release and occasional order trouble (mostly due to link emails sent to recipient's spam folders). During the second week, however, I was working on the next project, which is grOw/stOry #13.
This release will be a reworking and expanding of the former-E.L. Publication story "Bust in Space." I have been rewriting and lengthening the story, attempting to create a more fulfilling experience. The first draft has been completed, and has been touched up here and then. I am sure I will do more work on it, as time goes by. I was able to more than double the length of the story, and at more than 17,300 words, it will be the longest grOw/stOry to date.
Today, sketching each page in "thumbnail" pencil form, I worked on planning and "designing" the 16 illustrations that will accompany the text. This ties grOw/stOry #12 as the release with the most illustrations, as compared to the normal range of 11 to 14 images of previous releases.
After this stOry is released, I will be working on 2 more grOw/stOries, to round out the normal group of 3 that I usually release at a time.
Posted by BustArtist at 6:19 PM 8 comments: 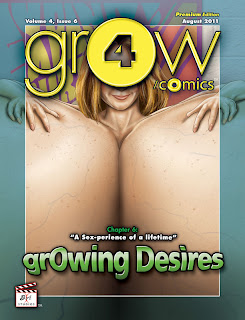 PREMIUM EDITION: Complete 20 image-only issue in separate file;
PLUS, a 42-page "The Making of grOw/cOmic#4" !!


At the end of the last chapter Jon's girlfriend, Lynn, said to him , "There will be no more holding back, Jon."  And she meant it!

Jon was now fully involved with the affect of the "Make Love Not War" Gas. Surprisingly, it seemed that Lynn knew more about it than he did, even though the night had been full of wild sexual encounters. And she was about to demonstrate just how much she knew!

Includes 4 extra pages compared to standard issues, as well as these bonus features, depending on the Edition you choose: 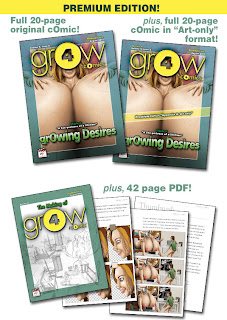 STANDARD EDITION:
• The Edition that you are always used to!

It took a little longer than expected, mostly due to last minute deadlines in "RL" work, but the final page — for both this issue and the entire series — of grOw/cOmic#4 has been completed! All that is left to do is the completion of proofreading and subsequent corrections (which is already well underway), the final production of the PDF, and the setting up of the store and its graphics.
In addition, I am also working hard on something "special" for those who are really into the Art of the whole series. Details on this to come at release time.
The next update here should be about the release of issue 6, which is titled "A Sex-perience of a lifetime."  Watch for it between tomorrow and Friday! In the meanwhile, enjoy the final preview of the series. Sorry it's so vague, but you know that I can't give too much away!
Posted by BustArtist at 2:47 PM 11 comments: