When my old store was shut down due to my old Host going suddenly out of business on June 1, 2012, it was a blessing in disguise.   (** Note: This also means I have no records of any sales made before that date — back-up your purchases NOW!) My new ecommerce solution is much easier to handle, set-up, and downloads are immediate after the order.

I was also able to create a custom website, using my own HTML and CSS. I think you'll agree that the current site is much cooler than the cold, catalogue-like layout of my original website.

Another benefit was the lifting of a lot of the file size limits.  This led to the fact that all the grOw/cOmics and grOw/stOries were able to be upgraded to 200ppi or even 300ppi for Premium Editions, along with a raising of the JPG quality from medium to high!  When I created the new store, I took the time to remaster all of the grOw/cOmics and grOw/stOries to the new high-quality settings — except for grOw/cOmic#1: Milk Farm.  The first grOw/cOmic had a few issues compared to all the rest that would not have benefited from a simple recreation of the PDF in higher quality. It needed some under-the-hood retooling (see the Remastered bullet points below).

And "Milk Farm" was much more difficult. As the first "grOw" ever, the way I set up the files was not as easy to convert as all the others. Plus, being the first release, my method of drawing the issue (scanning in hand-inked pages, then coloring in Photoshop) did not afford me the tight lines and accuracy I can now create when using my Wacom tablet and zooming in when needed while "inking" the lines in Adobe Illustrator. Thus, the line work was a little "heavy" when I first released it. Well, I went back and through a combination of coloring some of the lines to a lighter color and/or blurring them into softer lines, I have given the artwork a much-needed facelift (see example below and more on my website).

So, for the past 10 months, I have been slowly reworking the original grOw.

For those who have been inquiring about the "coming soon" on my website and waiting patiently, I can now say... 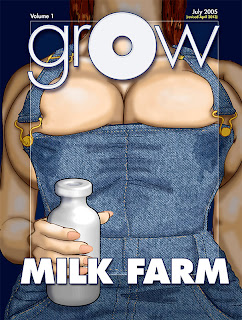 Now on Sale at almost 50% off of the last published price!

Bill was fired from his company for exposing the dangers of their new formula, which increases the production of milk in cows. He had discovered that it adversely affected humans. In an attempt to get back at his former employer, Bill and his wife, Rachel, experiment with the forumla to test Bill’s theory — and to have a lot of sexual fun along the way! But Rachel gets caught up in the excitement, and goes further than either of them had planned!

Available in either PREMIUM or STANDARD Editions!


Premium Edition:
For only $2.95 only $1.95 more than the Standard Edition, the Premium Edition includes the remastered issue 1, plus these additions: 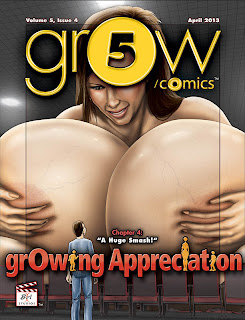 Available in either PREMIUM or STANDARD Editions!
Or, as part of the Current Series Collection.

Jennie had had enough with Guy and his obnoxious fandom. Pushed to the edge of violence, she no longer is resorting to idle, verbal threats. Meanwhile, the sun's energy waves continue to bombard the Earth, causing Jennie to grow even larger — to the point where the movie theater is becoming too small to house the growing giantess. During all of this, Jack is literally placed in the middle of all the action, sometimes beyond his control.


Available in either PREMIUM or STANDARD Editions!

AVAILABLE NOW AT www.bustartist.com !  (Visa, MC, PayPal)
Posted by BustArtist at 9:53 AM 12 comments: 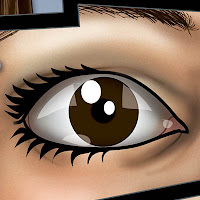 The last page of issue#4 is now completed!  Whoot! Sorry for the vague preview, but as page 75 is the last page of the issue, I didn't want to give anything away. However, I still have some work to do before release.  Next up is the creation of the cover to issue#5, which will appear as a sneak preview at the end of issue 4. After that, I still need to: proofread and correct; create the art-only pages; create the PDF and the Premium PDF; create the new graphics and pages for the website; and, set-up the store for purchase. I have hoping to complete this by Friday or Saturday — I'm crossing my fingers. The next update here at the blog will be the release announcement.
Posted by BustArtist at 7:45 PM 5 comments: